How to Groom Your Dataset?

A smaller voxel spacing than the original spacing improves the resolution of the segmentations and reduces the aliasing (i.e., staircase) artifact resulting from the thresholding/binarization process.

Resampling both images and segmentations

If your dataset contains both images (e.g., CTs, MRIs) and binary segmentations, it is recommended that resampling is performed on both to keep them aligned for subsequent analyses that might entail/need imaging data.

To mitigate this behavior, we need first to convert the binary segmentations (with zero-one voxels) to a continuous-valued (gray-scale) image. This can be done by either antialiasing the segmentations, which smooths the foreground-background interface, or converting a segmentation to a signed distance transform, where each voxel encodes the physical distance to the closest surface point (zero-one interface) with the sign indicating whether the voxel is inside or outside the foreground region.

Here is a resampling pipeline example for binary segmentation that uses antialiasing:

Images are already given as a continued-valued grid of pixels. Hence, images can be directly resampled without any pre- or post-processing steps.

Rigid alignment (aka registration) is an optimization process that might get stuck in a bad local minima if shapes are significantly out of alignment. To bring shapes closer, we can remove translation differences using center-of-mass alignment. This factors out translations to reduce the risk of misalignment and allow for a medoid sample to be automatically selected as the reference for subsequent rigid alignment.

Applying a transformation to segmentations entails interpolation due to image resampling in the new coordinate frame. Similar to the resampling workflow, we will first antialias the segmentation to convert it to a continuous-valued image with a smooth foreground-background interface, then apply the transformation, and finally binarize the tranformed image.

Here is an example of performing center of mass alignment on one ellipsoid:

In some cases, binary segmentations need to be clipped with a cutting plane so that only the desired part of the shape is reflected in the shape model. To perform this step, you can use clip defined the cutting plane defined using three points.

In many cases, image boundaries are not tight around shapes. This leaves too much irrelevant background voxels that might increase the memory footprint when optimizing the shape model. We can remove this irrelevant background while keeping our segmentations intact and avoid cropped segmentations to touch image boundaries, which results in artifical holes in the shape boundary and does not allow particles to be distributed in regions touching the image boundary.

This cropping and padding step entails the following steps:

Example of cropping and padding:

For numerical computations for correspondences optimization, we need to convert binary segmentations to a continuous-valued image that satisfies the following requirements.

An antialiased segmentation satisfies the first two requirements. However, if a particles leaves the surface (i.e., the zero-level set) during model optimization, which is typical in gradient descent based optimization, it would be challenging to snap it back to the surface.

A representation that satisfies all the requirements is the signed distance transform.

The computeDT API needs an iso_value that defines the foreground-background interface. To create a smoother interface, we first antialias the segmentation then compute the distance transform at the zero-level set. We then need to smooth the DT as it will have some remaining aliasing effect of binarization.

So the steps are:

Gaussian blur with a larger sigma. Note a smooth surface.

It is common in medical imaging data to have a left and right anatomy. To align and model all such shapes, we must reflect some meshes so that all are oriented the same.

Here is an example of reflecting a mesh:

Meshes can be converted to binary segmentations if desired so that grooming can be done on segmentations and optimization on distance transforms.

The steps to convert meshes to volumes are:

Example of turning a mesh to a segmentation:

Remeshing creates meshes with evenly spaced vertices. - remeshPercent remeshes the mesh to have a given percent of the current number of vertices

Here is an example of performing reference selection and rigid alignment on a list of meshes: 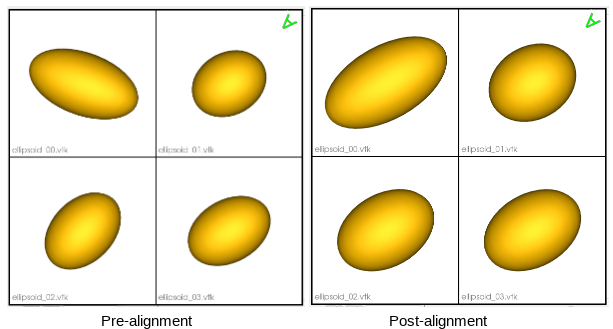 The boundary loop of the shared surface M obtained using the sharedBoundaryExtractor is computed.

Laplacian Smoothing allows you to reduce noise on a mesh’s surface with minimal changes to its shape.The effect is to "relax" the mesh, making the cells better shaped and the vertices more evenly distributed.